The river runs deep through the seeds of time

When you take lessons from Andy Wasserman here at PIANO LESSON CITY, you are on the receiving end of a lineage that extends directly to Frederic Chopin – the masterful Polish composer and virtuoso pianist of the Romantic era who wrote primarily for the solo piano. Wasserman often refers to him as “the father of Modern Jazz piano” due to the profound harmonic chord colors he innovated.

As you can see below in the timeline, Wasserman is four steps from Chopin! And, amazingly enough, there is a cross-connection of the piano pedagogy of Alfred Cortot through Andy’s Jazz life-long piano mentor Dwike Mitchell.

What a wonder: in 2017 we are only four steps from the piano teaching lineage dating back to the mid-1800s! That means you, the student, inherits the next and fifth step in this lineage of piano playing.

CROSS-CONNECTION OF LINEAGE THROUGH DWIKE MITCHELL

Dwike Mitchell (1930 – 2013) (see WIKIPEDIA link) Wasserman’s principal mentor of piano for over 30 years, was himself mentored at The Philadelphia Music Conservatory by Agi Jambor  (1909 – 1997) (see WIKIPEDIA link), who was a contemporary and colleague of Alfred Cortot.

Here is the lineage in a timeline diagram 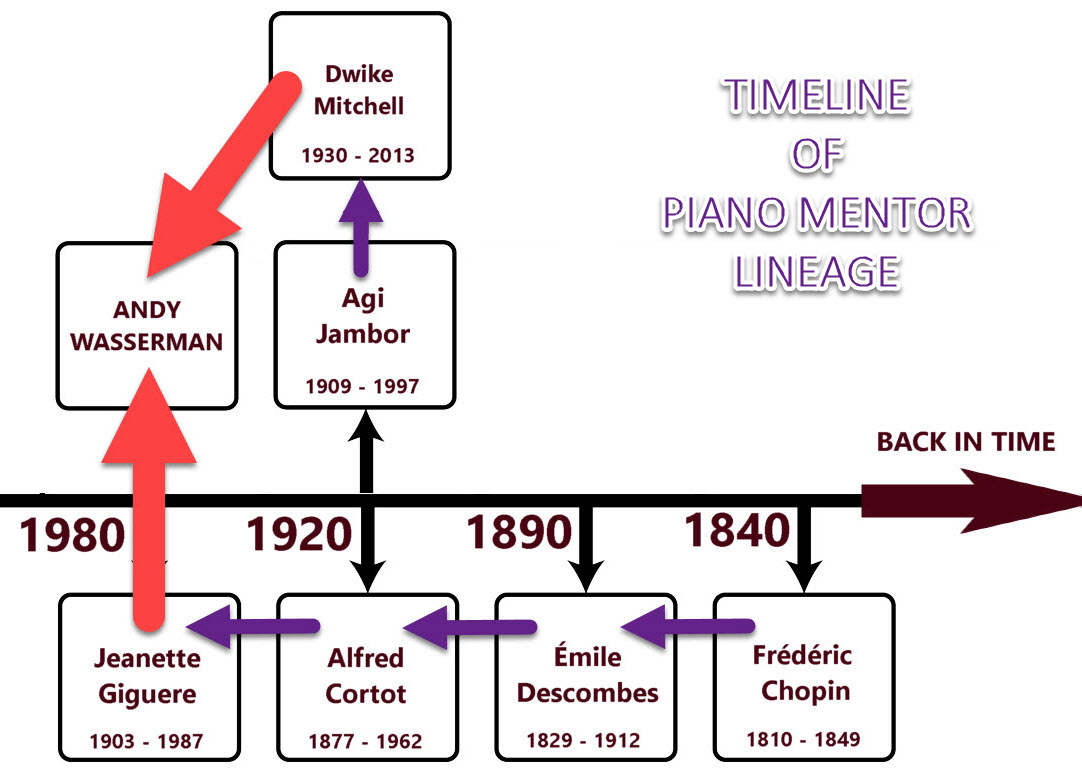 HIGHLY RECOMMENDED: a beautifully produced documentary on the musical inspiration that helped shape Chopin’s sound – with piano and vocal music performances, historical information, interviews and visits to the places and people in his life. Brings this genius to life in the 21st century! Anyone who loves Chopin will benefit from watching this 90 minute contemporary movie. It can be viewed here in it’s entirety:

For Your Listening Pleasure….

A Calendar Timeline of Blog Articles

PIANO LESSON CITY is your home to discover a virtual metropolis of musical possibilities! So get started now to find out how 2 sign up 4 lessons structured @ your comfort level.

YOU CHOOSE THE SONGS YOU WANT TO PLAY!

Then the fun begins: you'll get customized sheet music, video files and audio clips to help you practice - along with weekly guidance by your instructor via online video chat, email and/or phone at a day and time that works for you.

Simply use the contact form on our CONTACT PAGE, email or phone to get in touch with Andy Wasserman for your free-of-charge, no-obligation consultation. At that time you'll get all the answers to your questions and discuss the many options available for taking lessons.